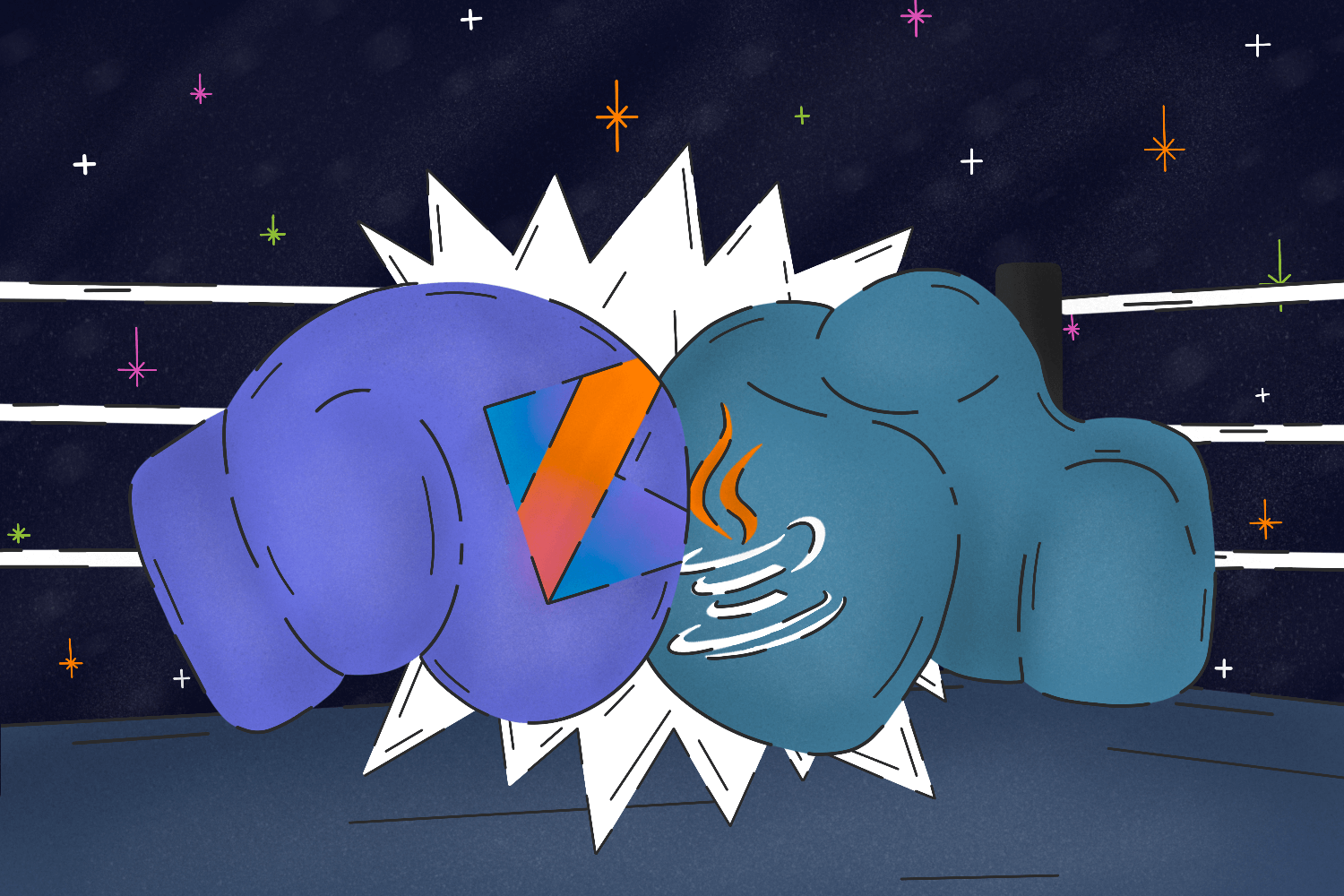 Kotlin vs Java: Which One Is Better?

Kotlin vs Java: Why is Kotlin the 1st choice for Android apps today, and how did it replace Java?

Kotlin’s battle against Java is like a tennis match between a world champion and a younger player trying to take the Wimbledon.

Although Kotlin began its development in 2011, it is currently one of the most modern languages. In the last few years of its development, the language constantly evolves and improves with new functionalities, which lead it to become the official programming language for the Android platform.

Since Kotlin came out, it started to replace Java slowly. Thanks to supporting it has from Google, more and more modern companies and developers worldwide are switching from Java to Kotlin.

In this article, we will explain the main differences between the Kotlin and Java programming languages, see which one is better in Kotlin vs Java battle, and why did Java lose the title?

Table of Contents hide
1 What is Kotlin?
2 Why use Kotlin?
3 What is Java?
4 What are the key features, differences, and advantages of Kotlin vs Java?
5 Kotlin vs Java: Which one to choose when building an Android app?
6 Kotlin vs Java

By definition, Kotlin is a statically typed programming language for the development of Android applications. Kotlin is concise, interoperable, safe, with excellent development tools and environment. It runs on a Java virtual machine (JVM) and can be compiled into JavaScript code or used in the LLVM compiler.

Although the syntax of this language is not compatible with the Java language, Kotlin is designed for full interoperability with Java code. The language is named after the island of Kotlin near St. Petersburg and was developed by the JetBrains company.

Kotlin is known to everyone who has used the Java programming language at least once. Although based on familiar concepts, Kotlin is a unique, modern, elegant, and pragmatic mix of famous models.

It was created to overcome the shortcomings of the Java programming language and very quickly aroused the interest of developers around the world. It is concise, secure, pragmatic, and compatible with Java code.

The primary purpose of the Kotlin programming language is to provide a more concise, more productive, and safer alternative to Java that can be implemented wherever Java is used today.

Kotlin works great with all existing Java libraries and frameworks because it is transpiled into Java code behind the scenes. The language itself overcomes the shortcomings of the Java programming language and successfully meets the expectations of many Java programmers.

Kotlin is also a great addition to the already existing Android ecosystem. Since it is compiled into a “bytecode” and runs on a Java virtual machine, it is 100% interoperable with the Java programming language. This allows you to add Kotlin code to an existing project and combine it with current Java code.

Kotlin’s advantages in programming over Java attract more and more programmers. Anyone currently thinking about a future project should focus on development under the Kotlin programming language as Jetbrains is working on new features for multi-project development.

Ever since Google announced it would provide development and maintenance support to one of the newer languages ​​Kotlin, its popularity has arisen.

Kotlin became the recommended language by Google when developing android applications. The Android platform is open source but is owned by Google, giving developers best practices and documentation.

Java is a general-purpose, open-source, and object-oriented programming language developed by James Gosling at Sun Microsystems. It was first started to use in 1995 and is mainly used for standalone applications or backend development.

Because Android itself is written in Java, it used to be the primary choice for most developers for Android application development. As a multiplatform language, it works on almost any operating system, device, and server.

What are the key features, differences, and advantages of Kotlin vs Java?

To understand why Kotlin is the 1st choice for native Android development today, we should compare its features to Java.

Both Kotlin and Java are statically typed, free and open-source, functional and object-oriented languages, but let’s see their differences.

First of all, Kotlin is fully compatible and interoperable with Java, which means developers can use older Java libraries or parts of code written in Java. They will work with Kotlin without the need for conversion.

Kotlin is a new and modern language that fixes some Java problems, such as null pointer exceptions (which are the number one reason for app crashes), no more raw types, proper function types, and much more.

It is also essential to mention the syntax of both these languages. Kotlin also typically has fewer lines of code, while Java adheres more to a traditional approach of making everything verbose. Also, Kotlin significantly reduces boilerplate code, thus making it easier to read.

With its new features like smart casts, data classes, coroutines, Kotlin enables developers to write clean, concise, and better code which helps them in the long run with code maintenance and introducing new features to the existing codebase.

On the other hand, Java is a well-known and object-oriented language that has been on the scene for 26 years now. Java is used for all sorts of applications besides just Android development. Since Android itself is built on Java, there are many libraries to help you with development.

Because of its solid features and fixes of some old Java issues, Kotlin replaced Java as a recommended programming language by Google for Android development. Almost every company nowadays uses Kotlin to build a native Android application.

Using Kotlin helps developers unlock the latest technologies and implement them into the app and, as a result, get a better performing app with cleaner and better code. It also helps you get a job since now all apps are mostly written in Kotlin.

Kotlin vs Java: Which one to choose when building an Android app?

Kotlin is similar to Java, but it is essential to point out some of its language features.

We can extend a class with additional functionalities without changing the existing code.

It is possible to create “mixed” projects, which would contain files written both in Java and in Kotlin.

Kotlin is efficient, easy to understand and learn, and quite effective in coding your applications.

Excellent support of development environments from day one

Kotlin doesn’t have any significant disadvantages because it is created to fix all Java bugs.

The only things Java has and Kotlin doesn’t:

Java has many essential features that make this language quite useful:

When Java is compiled, it is compiled into platform-independent bytecode distributed over the web and interpreted by the JVM (Virtual Machine) on whichever platform it runs.

Java’s compiler generates an architecture-neutral object file format and makes the compiled code executable on many processors with a Java runtime system.

Because of being architecture-neutral and having no implementation-dependent aspects of the specification, Java is portable.

Java is more dynamic than C or C++. Java programs carry a large amount of runtime information that can be used to verify and resolve accesses to objects at runtime.

The biggest frustration for Java developers that use non-nullable variables is NullPointersExceptions. Null is usually used to denote the absence of value, so Java developers have to write a few additional lines of code to find a way around this issue.

Java requires much more coding than Kotlin and most of the other programming languages. Because of Java verbosity, there are many risks of bugs and errors.

Due to all the above, Kotlin is currently the best option for Android development. Moreover, it is the first and leading programming language in developing Android apps. Thus it broadens the overall picture of the language and speeds up the process of improving performance. However, Java still remains an excellent general-purpose language.

Discussing and deciding which language is better is not so simple because more aspects need to be considered. We could compare many more features between Java and Kotlin, but in this article, we discussed some of the most important to help you decide which one to use.

Despite Kotlin’s advantages, Java still has its place in the market, but it all depends on what problems the developers are solving. When it comes to Mobile development, Kotlin is definitely the preferred programming language.

Have an idea and wanna build an app? We’ve got you covered! Contact our team of professionals at Async Labs for any additional questions. We are here to help you and guide you in the right direction.