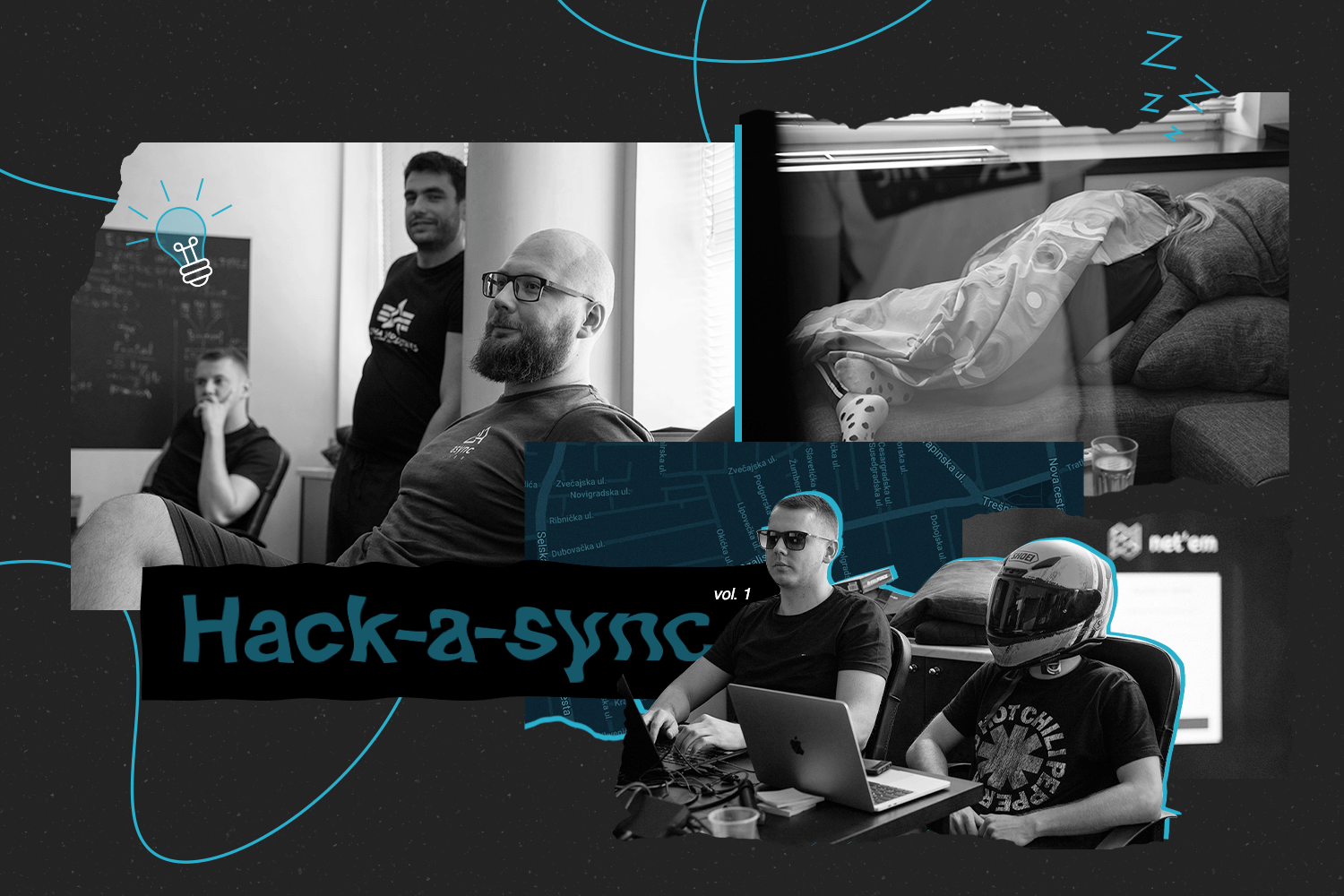 How We Survived the 1st Hackathon at Async Labs?

Welcome to our first hackathon!

At Async Labs, we constantly strive to deliver the best possible work for our clients and partners. Our motto, after all, is to put all our efforts into your product, so we can grow together.

Well, with our track record of some highly successful projects that we built from the ground up for those same clients, we asked ourselves: Why wouldn’t we put those skills to some good use and build something for us? And why wouldn’t we push ourselves to the utmost extreme at that?

At that point, we decided to host an internal 24-hour event that is popularly known as a hackathon.

What is actually a hackathon?

To quote our beloved Wikipedia:

“A hackathon is a design sprint-like event; often, in which computer programmers and others involved in software development, including graphic designers, interface designers, project managers, domain experts, and others collaborate intensively on software projects.”

Some of us had a fair share of experience with various hackathons that were organized while we were still computer science students. Those events were mainly organized by either IT companies or faculties to challenge aspiring young developers and push them to the limits.

We sought to transfer an overall great experience to the whole crew at Async Labs, where most of the devs and marketing peeps haven’t yet participated in such an event.

We ran a questionnaire amongst our dear Async colleagues to see if there was some interest in such an event. The hackathon was proposed to be held from Saturday 9:00 AM to Sunday 9:00. The response was quite impressive and surprising.

All 15 people (out of 21) who decided to participate in the questionnaire said they would like to participate in our first hackathon and see how that would play out. We also selected several Saturdays in July to see the best possible time slot that would suit everybody. The one date that prevailed was Saturday 10th of July.

We had no choice but to organize our first of many (hopefully) hackathons.

The golden idea behind our first hackathon

We were thinking about a plausible product idea that we can build in 24 hours to achieve a minimum viable product (MVP) and also launch in such a short time. Ideally, this product should be a SaaS that can also be monetized via a subscription-based model.

After a few brainstorming sessions before the main event, we found the winner. A lead generation tool that would simplify extracting and finding leads from Google Maps and help organize the leads and track them throughout the sales process.

There are some competitors on the market doing this stuff, and it’s not a revolutionary idea, but it seemed to us like there is quite some room for improvement, and we decided to tackle this head-on. Not much further research has been done, as we wanted the whole idea conceptualization and modeling to be also a part of the whole hackathon.

Saturday, 10th of July (Day of the Hack)

It’s 9:00 AM, and we are starting! After a nice and plentiful breakfast, we kicked off on the sound of our custom timer that slowly began to tick off seconds of the 24hour countdown. The hype is in the air!

First things first, our Alen pitched the team. The whole team received the lead generation tool idea exceptionally well, and everybody started to throw in ideas, questions, and suggestions. It was time to take it to the next step on the agenda, and that was to get to the drawing board and organize the team. And that’s what we did… or at least tried to do.

From the information map, we divided ourselves into two big teams that would then tackle their respective fields

A significant challenge in such rapid development exercises where you are building something from scratch is actually just that… Organize 15 people who are skillful in their areas from content creation, UI&UX, sales, frontend, backend, DevOps, PM to work very closely together and hit designated milestones that correlate heavily with one another.

We agreed to have a team sync every two hours to adjust work packages so that we always have a steady flow of work and functionalities or materials that the next step in development or marketing relies on.

The team started working on brand identity, and of course, the first thing on the radar was the brand name. After several hours of brainstorming, research, domain availability checks, we found it! There it was among the vast writings on the whiteboard… waiting to be drafted into service. The second column from the left, second name. Net’em.

With the brand name set, we now have the base on which the team will be able to part ways where the design team starts working on the brand book, landing page, and UX for the app.

In contrast, the marketing team attacks the digital advertisement, copywriting, and marketing strategy for all those potential new users (leads) that would use this tool to find their leads. Leadception! 🙂

In the development pool, we started with some basic architecture and workflows that would represent how the system works on a higher technical level.

Before organizing every developer it’s important that we all get a grasp of all core functionalities and rough user stories inside the app. So we started with a “General Flow” map that gave us a more comprehensive understanding of how this should work and interact.

After that, the devs dug in and tackled each part of the system. The hype was strong and we thought we would be able to build it all that we decided to do like “NO PROBLEMO”. Oh, how optimistic! 🙂

It’s around 10 PM, and we are more than halfway through. The fatigue started to kick in, and some are pushing it, like really pushing it.

At this point, we can say that productivity is starting to behave like a textbook log-scale meaning that the further we go into the night, the less productive work we can do per hour, and the bugs aren’t really helping in that statistics.

Most of the work we have until now are various parts that everybody has been doing for the past 12+ hours, and we are ready to start integrating APIs, HTTP crawlers, user registration and authorization, and UI.

At this moment, we still haven’t got anything on a staging server for the show-off, but hopefully, we should have something ready for a show-off soon.

It’s the dead of the night with the clock showing 3:21 AM. Everybody is tired, but the code keeps running. We are getting the first outlines of the application. Some things are working. Most items not yet. Russian Hardbass is keeping the tempo and BPMs.

The crawlers are getting some first leads.

It is Sunday, 8:45 AM, and the end is very near. We quickly finish all the work and look forward to seeing our final product. It was a really overwhelming weekend, but we can be proud of ourselves!

Although we only had 24 hours and pushed ourselves to the limit, we proved our motto once again, with a bit of a twist. This time, we put all our effort into OUR new product and grew together as a team and individuals. Extraordinary experience!

At 9:00 AM, we pushed the last parts that we managed to hack together and wrapped it up with huge applause and champagne.

People are evidently tired, but the faces are showing that sense of pride and accomplishment when you finish an endeavor like this one. We did a showcase of the app and all the materials we built in 24hrs. Impressive what a dedicated team can accomplish.

What we built during our first hackathon

The lead generation tool that we have built is Net’em.

The Net’em platform is an ideal solution for a target audience looking for quick access to leads. In the usual search for leads, a lot of time gets wasted. On average, it takes up to several hours a day to find leads for a person working in Sales. With this platform, you can easily get a large number of leads in just a few minutes.

Net’em is a digital application that generates leads at the user’s request. It provides the user with the following lead information: website, name, phone number, email, and address.

The user will search for leads based on the location and the query, for example, “restaurant in Zagreb, Trešnjevka”. After the platform generates leads, they are shown to the user in a list, where they can mark them as Cold/Hot Lead in the application and write a comment/note next to each of them.

​​Net’em is a market solution that enables leads to be generated extremely quickly in one place, potentially enter new ones that the user came into contact with outside the application, and monitor the state of communication with them.

The platform itself was created as Funnel, where the user scans the status of contacted leads. The user also can enter their leads in the lists and thus monitor Sales through the Net’em platform.

Some work needs to be done to polish all those things before we can go further with Net’em, but now we have a solid in-house product that we will surely start working on more actively in the coming months.

What we learned from Hack-a-Sync

The idea was to get something of ours running in 24 hours and see what all the different parts needed in digital products to get something ready for the market are. It was important for our whole team to get a sense of all the moving parts from different departments around Async Labs and how it is crucial to deliver a successful product.

It was also a bonding experience for the team. To see how your teammates function under such conditions, lift their spirits when they are stuck, and tell some dad jokes for a better mood. In the second half of the hackathon, we laughed so much that my throat started hurting during the night. And that’s the point of this kind of event.

Did we build the product we envisioned? Well, almost. Is it ready for the market? Not quite yet. Do we need to improve in some technical and organizational areas as a team? Absolutely.

Our first hackathon showed us the strength and weaknesses we have to work on all together to become better at what we do. The one thing that Hack-a-Sync showed us is that every member of the Async family has an indestructible spirit and the will to push forward, for which we are grateful and happy to be working with such amazing people.