An interactive and educational app aimed at those learning the rules of driving and preparing for their driving license exam. 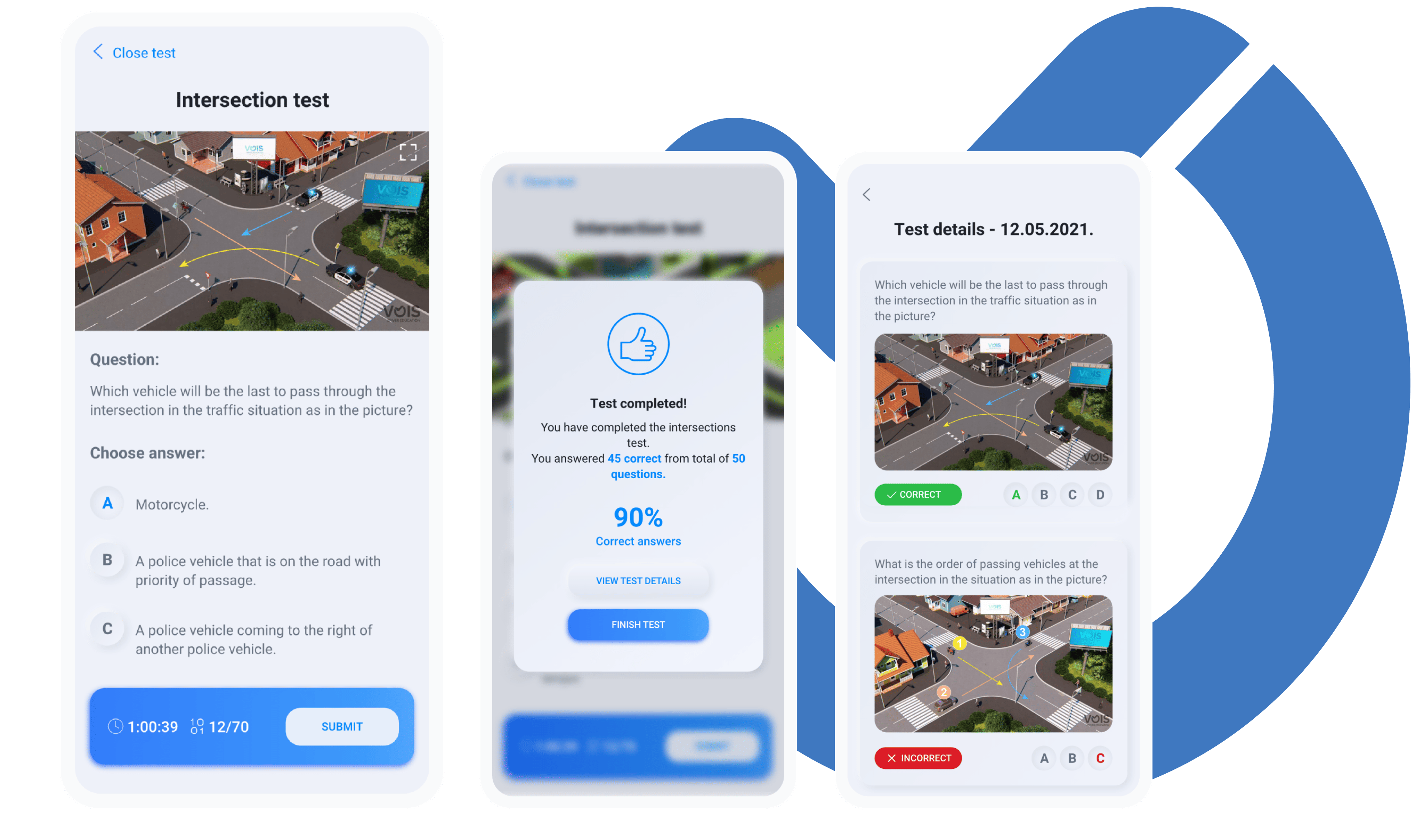 Back at the beginning of the project, the app’s owner wanted to offer a better and more interactive experience for those starting the process of acquiring their driving license. Given that the theoretical part of driving school can be quite tedious or even difficult for some, the client wanted to offer a more entertaining way of learning.

The VOIS driving school app is divided into 3 main categories for 2 types of users. Through said categories, the user is able to either acquire knowledge about traffic rules and conduction or test the knowledge that was acquired through the application. The two types of users significantly differ one from another. The differentiation amongst users is namely based on the permission each has – the students are able to access the part of the app that is designed for learning of said elements, whilst the driving instructors have complete access to the app including the ability to create classrooms and custom tests.

Given the fact there already are several types of such app’s in the region that VOIS is targeting, the main challenge was to present the content, usually taught in driving school classrooms, in a more entertaining yet, nevertheless, educational manner.

Having been provided with an approved design by the client, we were able to commence work immediately. The work primarily started with the adaptation of the existing design alongside adding a few new screens. Upon completion of said elements, our development team started working on the implementation of the app.

At the beginning of the project, the client had already had a finished UX design they had wanted to implement. Our team was consulted, given our industry experience, to present suggestions for improvements to the stated. Upon agreement, color schema and UX details had been slightly altricated in order to present the users with the best possible solution.

Creation and implementation of features

Having had an agreed-upon design, our team had started working on the implementation of wanted features. All of the below-stated app elements were implemented through Flutter. Each can be used to gain new or improve their existing knowledge of driving rules as well as test one's knowledge through units. The application, as mentioned, has three main categories for the user to use:

Each can be used to gain new or improve their existing knowledge of driving rules as well as test one's knowledge through units.

The Learn section is comprised of a total of 4 subcategories:
1) Intersections
2) Theory
3) Traffic signs
4) Park a car

The user is able to select the wanted data from an array of questions stored in a data pool. Said data pool encompasses everything that a future driver needs to know and can be found in the first three stated subsections. Each of the stated subsections has a visual presentation of the written content of each segment.

The Classroom section, however, is only available to those users that have a Premium payment plan. In most cases, said type of users will be actual drivers ed instructors that use the app to simplify the educational experience as well as ensure that the necessary materials are well adopted. Said feature also enables instructors to create custom tests that can be available only to a limited group of users, i.e., their students. Once they create a custom test, the selected users will receive a notification through which they are able to access the custom test. After the said test is completed, the instructor has a fully transparent insight into the students’ solutions.

Aside from the aforestated, the users also have the ability to test their acquired knowledge. Whether it is to test their preexisting knowledge or to check what they have learned via the VOIS application, they can do so via the third tab in the navigation bar - the Test tab. Said tab offers VOIS users the ability to assess their proficiency in either of the Learn sections (Intersections, Traffic signs, Theory). In case the user wishes to test all sections at once they are able to do so via the Custom test section. Said gives the user the opportunity to select from all three aforementioned sections alongside setting the duration of the test according to their preference.

After having created the main framework through, as stated, implementation in Flutter, we started simultaneously working on making the app available on both Android and iOS. This was done by using the native approach in which there were individual source codes for both iOS & Android. Each operating system required individual focus as each presented its own set of difficulties for implementation. However, after thorough research and hard work, the app was available on both system types, i.e., on both the AppStore as well as the PlayStore. Hereby, VOIS was available for all smartphone users - be it an Apple or any type of Android device.

Having implemented each and every feature important for the use of the mobile app, the ultimate implementation of this was that of multilingualism. Given the app would be available in numerous countries, it was of utmost importance that the app was available in more than just the Bosnian language. Consequently, the app is now able to be used in a total of four languages - English, German, Croatian, and Bosnian.

Once all of the aforementioned factors were combined in a well-rounded unit, the VOIS app was created. The users are fully able to use all the features available on the app be it online or off. Having finished the development of the application, we are more than happy to say the app is fully functional and can be used by the countries of Southeastern Europe.

“ The app is top-notch, and I look forward to welcoming them into my future development projects. ”

Nermin Isić Managing Director
1 / 1
Let's discuss your project
Next project MyDubrovnik App
Welcome to our side. We have cookies (to enhance your user experience).