Proof of Work – What It Is and How Does It Work?

In the blockchain industry, we hear a lot about consensus algorithms, we debate about them and try to learn as much as possible. As you know, to reach consensus on the network Bitcoin is using proof of work (PoW).

Ethereum is using it as well but soon will replace it with proof of stake (PoS). Why would they do that? Well, there are a couple of reasons, PoS is more efficient than PoW could ever be. But, both of them have their pros and cons.

In this article, we will make an overview of the proof of work consensus algorithm, its good and bad sides.

Table of Contents hide
1 PoW was introduced back in 1993
2 What does proof of work mean?
3 How does blockchain work?
4 How this prevents blockchain from changing history?
5 Which is a major drawback of proof of work?
6 Proof of work is not perfect but it works

PoW was introduced back in 1993

The whole idea emerged back in 1993 when Cynthia Dward and Moni Naor published a science paper On Memory-Bound Functions For Fighting Spam. In their paper, they were trying to introduce a new method of combating spam emails which are sent by using computer power for every email (or transaction).

“If I don’t know you and you want to send me a message, then you must prove that you spent, say, ten seconds of CPU time, just for me and just for this message.” C. Dwork and M. Naor, Pricing via Processing, Or, Combatting Junk Mail, Advances in Cryptology

The proof of work is a function that is hard to compute but easy to check. The function has a message, a recipient address, and a few other parameters. In that paper, Dwork and Naor called it the pricing function. Today’s computers can send millions of spam messages each day, which creates a big problem. However, if computers need to spend 10 sec on each message, they will be able to send only 8 thousand spams per day.

In 1999, in the paper Proofs of work and bread pudding protocols published by Markus Jakobsson and Ari Juels, the term “proof of work” is introduced and a notation is created. Their goal was to characterize the notation of a proof of work (POW), a protocol in which a prover demonstrates to a verifier that he has expended a certain level of computational effort in a specific time interval.

The protocol was not so popular until Satoshi Nakamoto released Bitcoin whitepaper, the proof of work was the most significant idea behind it. With that protocol, he introduced the idea of how it can be used to allow trustless and distributed consensus.

What does proof of work mean?

A proof of work is a consensus algorithm in which it’s costly and time-consuming to produce a piece of data, but it’s easy for others to verify that the data is correct. The most popular cryptocurrency Bitcoin is using a Hashcash proof of work system. Although the initial Hashcash idea was to fight against email spammers, Satoshi applied this idea to bitcoin transactions.

For a block to be accepted by the network, miners have to complete a proof of work to verify all transactions in the block. The difficulty of this work is not always the same, it keeps adjusting so new blocks can be generated every 10 minutes. There’s a very low probability of successful generation, so it’s unpredictable which worker in the network will produce the next block.

In a network, users send each other coins and the ledger gathers transactions into blocks, but someone should take care of all transactions and validate them. In every blockchain, some nodes are doing validation. In the example of Bitcoin miners are nods.

In a Proof of Work blockchain, the participants ready to spend computational power to solve cryptographic problems have the right to add new blocks to the blockchain.

The way those nods authorize transactions depends on the consensus algorithm, it doesn’t need to be proof of work, but in the Bitcoin example, it is. Long story short, proof of work is a system that ensures security and consensus throughout the blockchain network. It’s evident that participant, who validates block, have invested significant computing power to do so.

How does blockchain work?

Well, miners will try to guess a random number that should give them the right hash for that block of transactions. In this process, there are two things that we have to define: nonce and hash function.

Hash – it’s an algorithm or very complicated formula that converts any sequence of characters into a string of 64 chars or numbers.

As you already know, every block in the blockchain has its hash (id). That’s a string that someone got when he verified that block. So when you want to verify the next block, you will take that hash and add the current block of transactions. You will have a big block of text.

When you have all that, you are ready to start calculations. For calculations, you use the hash function, and change the random number until you get a string that has a certain number of zeroes in front of it.

It seems easy, but be aware that your computer has to perform around 10n21 computations to find the right number. That’s not a small number and it takes around 10 min to find the right number that will give you the needed string. For a hash function, Bitcoin is using the SHA-256 hash algorithm. It’s not connected to proof of stake and you don’t need to use that algorithm, but Bitcoin is using it in its proof of work. 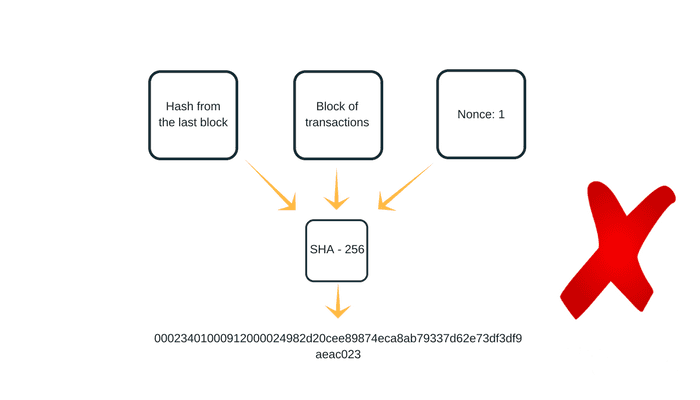 You can see in an illustration above that you didn’t get the right string. The resulting string starts with only three zeros and you have to get a string with 18 zeros. So, you will choose another random number and start another calculation. This time we will choose number 2. 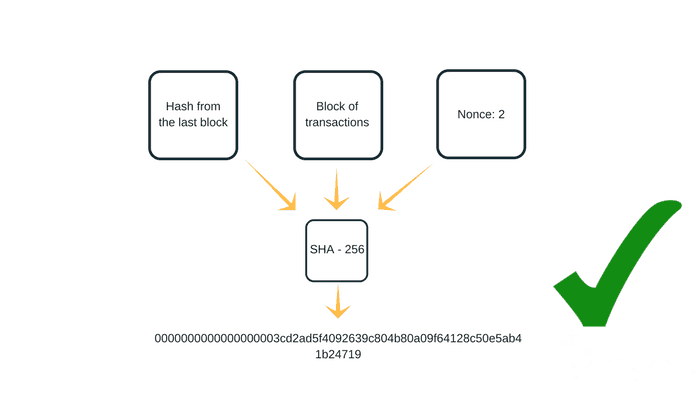 This time, you chose the right number and as a result, you got a string that starts with 18 zeros. You verified this block, and if you were the first one who got it a reward for that block would go to you.

A machine or computer must keep incrementing a nonce until it finds the right one. It means a computer has to brute force that number and generate millions of hashes per second to generate the one that will have the same number of starting zeros as defined. It’s costly and time-consuming to execute a PoW for a block, but it’s easy for someone to verify if some block is correct.

Let’s say someone wants to check if Node A did the required work. He will simply use the block string that Node A got after validation and take its nonce number. On them, he will apply the hash function and if the result has the correct number of leading zeros, if it has, everything is fine.

Proof of work ensures that blocks can’t be added to the blockchain without executing the necessary work. That way, an evil node can’t easily validate blocks and add whatever he wants into the blockchain. If he tries to, other participants in the network would just dismiss his block, and everyone would know that the block is not valid.

How this prevents blockchain from changing history?

The interesting thing about hash functions like SHA-256 is the fact that the function will give a different result if anything changes in a block of text that you validated. This means that if someone changes only one transaction for a small amount, the result will not be the same and everyone will know that it’s not a valid transaction.

Just imagine having an agreement with your employer about work requirements and conditions. If it’s on the blockchain, no one can change it and say something other than what you accepted. If someone changes something, the hash string will be different and everyone in the blockchain network will know that it’s not a valid agreement.

Which is a major drawback of proof of work?

Proof of work is a great consensus algorithm, but it’s not perfect. To execute PoW we have to spend high amounts of electricity and computer power just to brute force hashes. The power used for PoW is just a waste of resources. Just imagine if some cryptocurrency that uses PoC, like Bitcoin, goes to mainstream adoption. How much electricity would be used to have the network running?

The second problem is centralization and mining pools. Someone who mines with just one CPU will not have a good chance for a reward, but someone who has a mining pool with a thousand CPUs will have a better chance.

Today, almost 50% of Bitcoin hash power is coming from a few mining pools. That means that only a few people have to meet at the same desk to agree on a 51% attack and changing the blockchain if they have a reason to do that. This may create centralized PoW and it goes against the idea of decentralization.

Proof of work is not perfect but it works

Maybe you are not sure of how proof of work could achieve consensus, so I will try to explain it a little bit. For any proof of work system, you have to be sure that at least half of the participants have good intentions.

Why is that important? Well, you don’t know who they are and where are they coming from, you don’t know anything about them. In the Bitcoin example, it doesn’t matter. No one knows who will be the next successful validator, so in that system, we have more than a 50% chance that the validator will have good intentions.

In a blockchain, you have a chain with blocks on which you can add a new block after it has been validated. Bitcoin community agrees that the longest chain will be the right one because the most amount of work had gone into that chain.

Let’s just see what could happen if more than 50% of validators had bad intentions. Someone could put wrong transactions on the block and someone else would have their funds stolen.

The community would not believe in the network anymore and would start to use another blockchain. If that happened, miners who earn a lot of money every month for validation and who invested a lot of money in the equipment would lose everything. The use of that blockchain would decrease significantly and miners would not accept that.

We have to keep in mind that miners are validators, so if someone wants to make a bad thing on the network that could happen only with their help. This shows that the network has an economic reason to stay fair and honest.

What are your thoughts on the concept of Proof of Work? Write to us at hello@asynclabs.co.